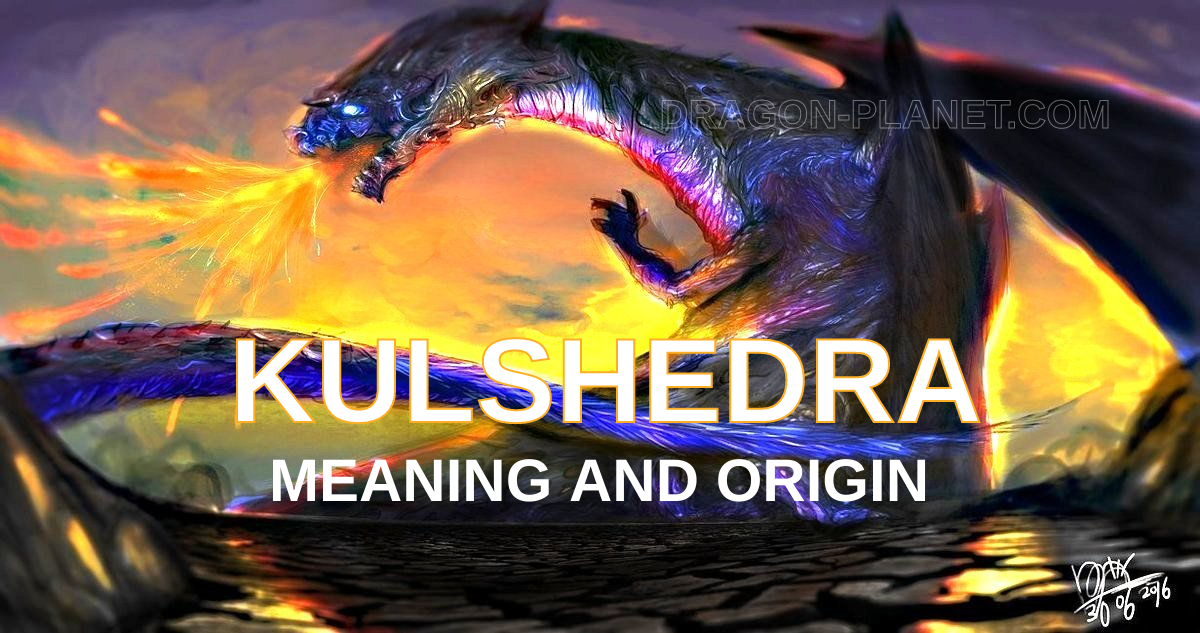 At this time, he learns to hide hid fire-breathing abilities and become a Kulshedra. 🐉

Sometimes, Kulshedra or kuçedra is also depicted as a huge ugly woman with a hairy body and pendulous breasts.

When the weather turns bad, dark clouds form and violent thunderstorms break out, the Kulshedra is believed to be nearby. Can counteract its destructive power by chasing away storms.

Kulshedra or Kuchedra is a fire, water, storm, and chthonic demon in the mythology and Albanian folklore, usually represented as a huge female dragon with multiple snake heads.

Kulshedra is believed to breathe fire, cause droughts, storms, floods, natural disasters, earthquakes and other against humanity.

In Albanian mythology he is often fought and defeated by Drangue, a half-human, divine hero with wings and a protector of humanity. Strong storms are believed to be the result of his battles.

In Norse beliefs, Kulshedra can possess both the moon and the sun. In Southern beliefs, she is described as a huge serpent woman who encircles the world.

According to this version, she could destroy the whole world if she ever touched her tail with her mouth. It is said that she demands human sacrifices for agreeing to ward off natural disasters and catastrophes.

According to popular belief, the first stage of the Kulshedra is the Bolla, which has the appearance of a watery, chthonic demonic snake.

The eyes of the Bolla remain closed throughout the year, except on St. George’s Day, devour any human in sight when it looks out into the world.

The Bolla turns into a Kulshedra if it lives many years without being seen by a human. The Bollar and Errshaja are considered intermediate forms of this snake that undergoes a series of metamorphoses.

These terms also mean snakes; the term Bollar being simply a synonym for Bolla in the south of Albania. Kulshedra is represented as a female, a turtle, eel, a lizard, a frog or a salamander in some regions.

The Kulshedra appears as a woman to keep it true nature hidden. As a semi-divinity human figure, it also possesses positive qualities that are indirectly reflected in Albanian stories, rituals and beliefs.

The village where the Kulshedra lives enjoys great prosperity in the field of agriculture and animal husbandry.

Indeed, it absorbs foodstuffs from everywhere with its breath, and its villagers live, while the villages concerned become poor and do not prosper.

According to popular beliefs, people used to make sacrifices to her so that she could bring them well and stop any harmful actions.

The term Bolla is etymologically related to Greek Φάλη, Φάλαινα “huge whale or monster,” (although the relationship is not certain).

By some sources, the term bullar is given as a south of Albania variant.

Kulshedra: the origins of the myth

Similar figures, using different names but the same motifs reflecting the existence of the dichotomy of “good and evil”—which is primarily reflected in the community’s protection from storms—can also be found in the folklore of other Balkan nations.

It is said that the Bolla remains closed until St. George’s day, he will devour any human who comes near it when it looks at the world. Folklore explains that St. George had cursed the beast to be blind forever, except on his feast day.

Kulshedra is considered a female dragon, as a form of multi-headed snake, but she is known to have pendulous, drooping breasts that touch the ground, so some German commentators have stated that she could also be considered a witch.

In addition, Kulshedra is said to be covered in red woolly hair, to have seven to twelve heads and to have a long tail. It is also said that she spits fire.

Kulshedra’s milk and urine are believed to be poisonous. Kuçedra may also appear in the appearance of a human woman; her appearance in the guise of an ordinary woman is experienced locally, for example in Dukagjini, Kosovo.

She can also appear in the form of a lizard, a turtle, a frog or a female salamander.

Meanwhile, Kulshedra is considered a storm demon; Kuçedra is believed to cause droughts and other water-related human problems such as tornadoes, storms, water shortages, violent storms, floods or other natural disasters.

Often a human sacrifice must be made to appease her, as the story of the hero Kerosi (“head of death”) attests.

Southern beliefs describe her as a huge snake woman who wraps herself around the world. According to this version, if she ever touches her tail with her mouth, she can destroy the whole world.

According to Norse beliefs, Kulshedra can possess the sun and the moon. To scare the demon away, Albanian tribes shot into the sky or made a loud noise with metal objects, including ringing church bells.

“The male form, called Kulshedër, acts like the devil”.

According to popular belief, a snake, after living a number of years, metamorphoses into a Bolla and eventually becomes the monstrous Kulshedra.

The belief that the ancient serpent turns into a dragon is not unique to Albanian culture, as similar beliefs exist, for example, in Hungary and Romania, as Robert Elsie notes.

In the Kosovar city of Pristina, the Kulshedra begins life as a creature invisible to humans for the first twelve years of its life, after which it becomes a bolla (‘kind of snake’) and then grows wings, becomes hairy and begins to fight the drang (dragua).

But the folklore of Malësia and the northern mountain range of Albania provides for a more complex life cycle: if the snake manages to live unnoticed for fifty years, it becomes a bull, a reptile that gives snakes milk, from which they get their poison.

If the snake lives another fifty years unnoticed, it becomes an ershadj, which wraps itself around the neck of its human victim, pierces her chest and eats her heart.

If the ershaj (eršaj) lives another hundred years unnoticed, it finally turns into a kulshedr.

In Tirana, it was said that the Kuçedra began its life as a creature hidden in a dark hole, which after six months turned into a snake; the snake had to grow for another six months before it showed the behavior by which it could be properly called Kulshedra.

In the Albanian castrate tribe, it was believed that a snake that saw a spotted snake would lose its ability to turn into a Kulshedra.

Dragua, also called drangwa or drangoni, is the (male) conqueror of the Kulshedra (female) with whom they must fight to the death in collective beliefs.

Their main purpose in life is to fight and kill Kulshedra. So they spend most of their youth playing sports and running, learning to avoid Kuçedra’s urine and milk.

When they sense Kulshedra approaching, the dragua ‘go completely mad, and their souls leave their bodies to prepare for the battle to come.

When one of them is attacked, the dragua “fly to the rescue and kill the Kulshedra, pelting them with sticks, plows, pitchforks, spears, and stones, and even uproot trees and houses.”

These attacks are considered by the people to be lightning fast. The battle is believed to have resulted in violent storms.

The dragùas, even in their infancy, use the cradle to protect themselves from the attacks of the kulshedras, which consist of her urine and the toxic milk from her breasts. They also use this cradle as a weapon.

In northern Albania, the two are considered to be perpetually fighting in the bend of the Drani, in the northern mountain range.

But some folklore speaks of the dragùa accomplishing the destruction of Kulshedra by drowning, and in central Albania, it is said that the hero drowned her, knocked her out by throwing trees and rocks at her, and then drowned her in the Shkumbin, a river in central Albania.

The Dragùas are not the only beings to have defeated Kuçedra. There are many tales (see: Folk tales and other stories with Kulchedra) in which saints and folk tale heroes not identified as dragùas defeated Kulchedra.