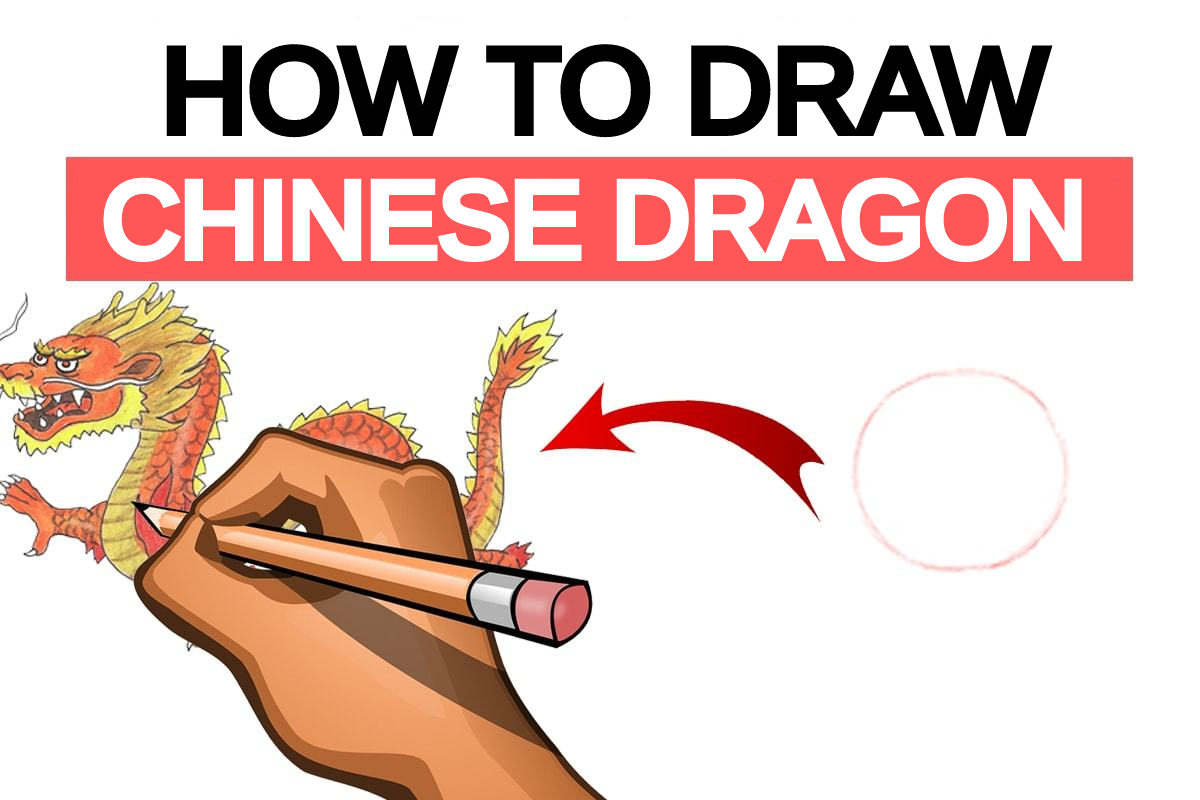 Welcome to you, child of the circle of fire!

We meet again for a tutorial that you’re going to love: “How to draw a Chinese Dragon“. You may think it sounds impossible, but it’s just the opposite! We will explain everything step by step so that you can find your way around easily.

Learn how to draw easily a Chinese dragon in several steps:

?7 steps to create the body of the dragon.
?14 more steps for its head.
?6 steps to make its paws correctly.
?1 last step to color and finish.

The Chinese dragon has fascinated for hundreds and hundreds of years. Also known as the oriental dragon, it already existed in antiquity: emperors then known as “dragon’s sons” could carry special objects that ordinary people were denied access to. Icon of the Chinese New Year, it appears everywhere: it is very common to see dragon decorations in Chinese or Japanese houses, even more so in temples. Westerners are in turn more and more interested in this mythical creature through feng shui for example. Having a healthy environment full of positive energy is very important in everyday life. You can consult our incense burners in the image of the Chinese dragon to both decorate your interior, but also to free it from any negative energy!

For this tutorial, you do not need professional materials, pens, felt-tip pens or brushes. All you need to take is :

?A blank A4 sheet of paper (or more in case you want to do it again ?)
?A wooden pencil
?Some light colored pencils (red, orange, yellow)

1) THE BODY OF THE CHINESE DRAGON

Before you start, a little hint: new design elements at each step are indicated in red.

Step 1: Start by drawing a small sketch in the shape of a simple circle in the upper left corner of your white sheet of paper. This will be the base of the head of your Chinese dragon. Be careful not to make it too small: think of the surface of a billiard ball. The circle doesn’t have to be perfectly round!

Step 2: Draw a curved line on the left side of the circle, which will go down to the middle, then draw a second horizontal line just as curved that will cut the circle in two. These are construction lines that will allow you to draw the dragon’s head. ?

This is a very good start!

Step 3: Draw a first line in the shape of a “C” that will start at the beginning of the previous line, until almost its end inside the head. Draw a second “U”-shaped line this time at the bottom of the head on the left side. These are markers for the dragon’s jaw.

?A circle similar in size to the dragon’s head just below, slightly offset to the right. The farther this circle is from the head, the longer the neck of the dragon will be.
?A smaller circle in the upper right for the lower part of the body. These 2 circles will determine the shape and the waviness of the dragon. You can decide to make your dragon longer if you wish, just move the circles away!

Step 5: Draw 2 series of lines, like a pipe that will connect the 3 circles. You can start on the right side of the head, go back and touch the bottom circle and then finish on the top part of the circle on the right. These lines will form the dragon’s torso and backbone, and will give it a wavy shape like a snake.

Step 6: Now that it’s done, you can draw the dragon’s tail. The shape should be like a letter “U” but more curved at the end. The first line that starts in the middle of the circle should be thinner, while the second line that starts at the bottom should be wide, until it almost touches the body line you drew just before!

Step 7: Draw 4 series of lines at the bottom of the body to make the future legs of the dragon. The first one starts at the very left of the bottom circle, the second one on the right while going a little inside, the third one along the tail while tilting it towards the inside of the body, then the fourth one towards the middle of the tail by drawing it outwards this time.

2) THE HEAD OF THE ORIENTAL DRAGON

Congratulations! You already have a very good base!

We continue with the drawing of the head of the Chinese dragon.

Step 8: Draw eyebrows in the shape of a flame on each side of the line that crosses the dragon’s head. Draw some kind of spikes on the top of the eyebrows, four will be enough. No need to make them too big by insisting on your pencil! Finally, don’t forget to leave a space between his eyebrows and the line just below: it will be for his eyes. ?️

Step 9: Draw two half circles on the lower half of the eyebrows for the eyes. The left eye should be slightly smaller for perspective. Then make a small circle inside for the pupils. Finally, draw small lines under each eye for detail.

Step 10: Follow the path of the “U” shape you drew at the very beginning to make the dragon’s snout. You just have to make two curved lines in the shape of a cloud that overlap and then a kind of rounded “V”. Add a little line on the right for structure.

Step 11: Once this is done, draw a series of rounded spikes to make the mustache at the end of the muzzle. You have to make it a little bushy!

Step 12: Draw the whiskers by making two rounded lines along the muzzle for the left one, slightly offset for the right one. The important thing is that they are well rounded! You can make them longer again if you wish.

Step 13: Draw the open mouth of the dragon using the U-shaped line you drew at the beginning as a guide. Make the lower left side of the mouth more wavy to place the teeth in the next step.

Step 14: Draw teeth in the dragon’s mouth, they must be sharp. You can add more if you want, but don’t make them all the same size or the effect won’t be good.

Step 15: Draw the skull and the outer part of the jaw following the lines you drew at the beginning to guide you. Be sure to bend the lines to get the correct shape.

Step 16: Draw the tongue of the Chinese dragon inside its mouth using the 2 lines on the left.

Step 17: Now traces his beard on both sides of his jaw and chin. It should be made of small rounded triangles or “V” letters. Don’t forget to lengthen it enough so that it protrudes over the mustache.

Step 18: To the right of the main circle, draw a curved line to make the ear that will be similar to a cow’s ear. ? You can go over it again once the lines are well drawn to blacken it. Add lines inside for structure.

Step 19: Chinese dragons have horns! Draw the first one on the top of the head on the right. The shape should look like a slightly slanted “Y”. Once you have the right shape, you can go over it again to darken it.

Step 20: Draw a series of spikes and slightly rounded lines to make his legendary mane. No, the dragon has no feathers!

You have to follow the line you drew for its body. The dragon’s hair should cover most of the back of its neck, but not go beyond the horn on the right. You can move it a little to the right by making the spikes sharper.

Step 21: The time for the 2nd horn has come! Draw it at the beginning of the first spike of the mane, to finish it behind the right horn. Its shape should look like a small cactus. ?

3) THE PAWS OF THIS FANTASTIC CREATURE!

You’re almost at the end of this drawing, nothing could be easier, eh? You’ll see, the final result is great.

Step 22: Draw the first front leg using the lines you drew underneath the body. First draw the first toe, then the second, then the third toe by adding curved and sharp claws. Continue by drawing along the leg to go up, then draw a kind of flame-like fur in the shape of an eagle.

Step 23: Draw the other front leg following the same instructions. The toes should be more inclined, and should overlap a little more with the perspective. The fur of the Chinese dragon should be smaller because it is less visible on the other side. The dragon should look like it wants to catch something.

Step 24: Use the lines drawn in the lower right to draw the first hind leg of the Chinese dragon. Make the claws one hair more curved than for the front paws. The 4th toe should point to the right, as if the dragon was walking. ? Don’t forget the flame fur, which this time must be clearly visible.

Step 25: You’re at the end, just a few more steps! Use the 4th line you drew to draw the second hind leg of the creature. The toes should be pointed and well apart! However, no fur this time.

Step 26: Finalize the whole by blackening certain elements such as the legs or the body of the dragon.

Step 27: Draw a number of thick peaks along the body of the Chinese dragon. They all have to meet each other, even if they are spaced they must not be totally separated! At the end of the tail, draw a kind of flame in rounded peaks.

4) THE FINISHES AND COLORING OF YOUR MASTERPIECE

Step 28: And there you have your dragon! You can color it your own way, but we recommend you use orange for the body and scales, red for the flame fur and tongue, white for the teeth, yellow for the mustache, beard and spikes and finally brown for the inside of the mouth and ears!

You made a beautiful drawing, no doubt about it 😉

And since you seem to like oriental dragons and you have an artistic fiber, go and see our Chinese Dragon Products to wear drawings of the mystical beast in life-size version !

We hope you liked this article about How to Draw a Chinese Dragon. Please don’t hesitate to give us your impressions in the comments !

If you would like to read more articles similar to How to Draw a Chinese Dragon, we recommend that you visit Blog

And if you liked this article about Dragons, it is sure that you will appreciate it too…

Leave a comment about How to Draw a Chinese Dragon